A multitude of stakeholders in Port Moresby are engaged in making the city’s markets safer for women and children, and in turn, stimulating economic opportunities for the urban poor.  In this feature story, ABV volunteers tell of their role within this UN Women’s initiative and the inspirational efforts of Councillor Mato Posu, who has lead successful efforts to create behavioural change within the notorious Gerehu Market in the city’s north.

The lack of security in Port Moresby markets not only creates fear and anxiety among the mainly female vendors, it also restricts their access to trade and economic opportunities.  A scoping study conducted by UN Women in 2011 found that 55 percent of women and girls who participated in the study had experienced some form of violence in the markets surveyed.   In addition, 22 percent of women had experienced sexual violence and 64 percent of both male and female respondents reported witnessing some form of sexual violence against women and girls in the markets and surroundings.

Against this background, and in consultation with the local government authority responsible for markets in Port Moresby, the National Capital District Commission (NCDC), UN Women designed the Safe Cities Project aimed to remedy this situation, including asking ABV for assistance. 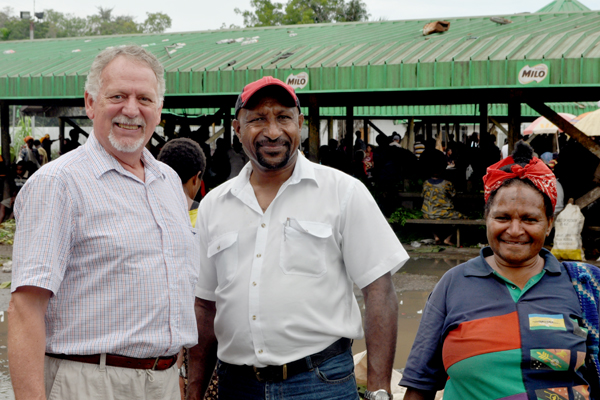 When ABV volunteer, Derk Swieringa, first entered Gerehu Market during his initial assignment with UN Women in Port Moresby in March 2012, he was appalled by the conditions.  He vividly remembers how the facilities were broken down, that the hired security and NCDC management were incompetent and activities such as gambling, drugs, drinking and betel nut trade were highly visible within the market.

“In consultation with UN Women and the NCDC, we decided to conduct a trial at Gerehu Market, to learn about how improvements can be designed and implemented.”

Having worked as Operations Manager in one of the largest shopping centres in Canberra, responsible for all operational aspects of the major retail, office and carpark complex, Derk was the ideal ABV volunteer to provide financial and operational management guidance to the NCDC, the key implementing partner within this UN Women’s programme.

In less than two years and three more assignments later, Derk believes the working conditions for female vendors at Gerehu Market has dramatically improved.  “Under the supervision of UN Women contractors, recommended infrastructure upgrades have been completed, including new toilets and basins so vendors can clean their fruit and vegetables before they are sold to shoppers.  New security operators have been hired and incidences of gambling and drinking have been eliminated,” said Derk.

The community of vendors has also been supported daily by local Councillor Mato Posu, who in Derk’s opinion has become the local hero within this success story.  Councillor Mato was appointed by the governor of Port Moresby to represent the communities living around Gerehu Market.

“Whenever I went to the market, she was there and a great source of advice to me. Councillor Mato displayed very obvious leadership abilities,” said Derk.  “She saw it as her role to identify problems at the market and to press for improvements.”

ABV volunteer and gender educator and mentor, Lorraine McBride, was deployed earlier this year to transfer skills to staff on the gender equity desk within the social services division of NCDC.  She supports Derk’s call for recognition of the efforts of community members and positive role models like Councillor Mato, as well as NCDC staff such as Kay Ma’a, coordinator of the gender equity desk and Kay Kaugla, gender based violence, health and wellbeing worker – who are all actively involved within the UN Women’s Safe City Programme.

“During my ABV assignment, I worked closely with staff on the gender equity desk to restructure a staff model that links with relevant activities and with a high focus on strategies to stop violence in public spaces,” said Lorraine. “The aim was to work together with the Office of Women’s Development, National, Provincial, District, and Local Councils of Women to promote gender and give access to a “woman’s voice”, along with providing educational pathways that strengthen and empower women, children and the community.”

In addition, Lorraine created a strong network of district staff, community leaders, vendor associations and community groups to support these activities.  “The gender equity desk quickly became a place for women, and members of the community, such as Councillor Mato, to draw information, resources and support.” 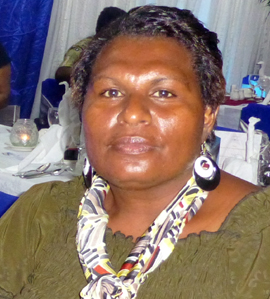 After her appointment as Councillor expired, Councillor Mato was employed by the NCDC as the Manager of the Gerehu Markets.  Her efforts to create a safer It is about how all these technologies come together to give the right insights, at the right time, based on the right — whether it is generated by people, machines, or the web. market for women and girls have not gone unnoticed – she was recently bestowed the Bravery and Courage Award within the Pride of PNG Awards for Women.

ABV volunteers, such as Derk and Lorraine, have proved effective in strengthening the capacity of NCDC staff.  Derk, on his first visit, designed a staff structure for the NCDC’s central office market management and subsequently has supported the implementation and new staff recruitment.  Lorraine worked alongside staff to conduct workshops and meetings with the vendor’s association and community to assist in the creation of an action plan to address key organisational and community issues.  A third ABV volunteer, Anoop Johar, who is a community development and research specialist, created gender responsive marketplace policies and bylaws.

Sarah O’Connor, Chief Executive Officer of ABV, said these short-term capacity building and organisational strengthening projects completed by qualified and experienced ABV volunteers have resulted in much-needed pro-bono inputs into the program. “By being short-term assignments, the focus on the volunteer is to train and support, rather than do the work for the local NCDC staff. “It also illustrates why ABV partners with intergovernmental organisations, such as UN Women, even though our mission is to strengthen businesses,” Sarah added.  “It is through initiatives like the Port Moresby Safe City Programme that individual vendors, family-run businesses and small enterprises can enjoy the opportunities presented by safe spaces in which to trade.”

UN Women’s Programme Team Leader, Alethia Jimenez, advised that the Governor of Port Moresby is aware of the improvements at Gerehu Market and wants them implemented at Gordons Market, the biggest market in the city.

“Due to the size of Gordons Market, I believe this will be a most difficult challenge, particularly as the NCDC’s market management still require more training and assistance with designing operational procedures,” said Alethia.

Recently UN Women and Nationwide Microbank created a mobile banking system that allows market vendors to pay market fees via their mobile phone, increasing the likelihood that fees collected are re-invested in operating and maintaining the markets. Furthermore, this new financial system enables vendors to bank their takings into their mobile phone account, reducing the risk of theft.

“We have also been successful in our recommendations to the NCDC police force to establish a full-time police station in Gordons Market,” added Alethia.

In addition, the Australian Federal Police recently deployed 30 police officers to Papua New Guinea to work alongside counterparts in Port Moresby and Lae within a program to boost community policing operations, with another 20 to be deployed before the end of the year.  The NCDC markets will be included in their rounds of the city.

Further information on UN Women’s Safe Cities Project and the scoping study can be found here.