Police Officers of the Santa Rosa City Police Station in the Philippines couldn’t be happier with the recent training, mentoring and support received from IBM corporate employees.

With the bigger goal of improving the safety and security of the city in mind, the team focused specifically on working with personnel to improve records management processes and gain social media skills, with the goal of leveraging social media for improved community relations.

According to Police Chief Pergento Malabed, officers have not only gained valuable new skills that improve the overall performance of the station, but the project has also provided an opportunity for the Santa Rosa City Police to showcase their commitment to crime prevention and community security. 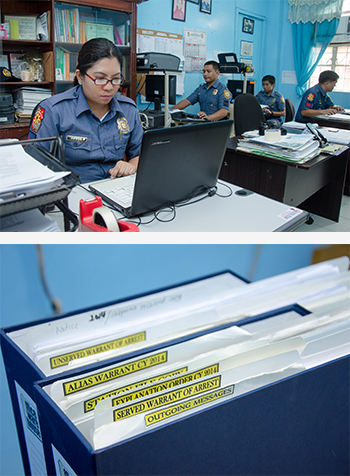 “Improving processes at our station and enhancing the skills of our personnel not only improves our performance but also increases safety and security in our city, community perception of police and collaboration between police and the community,” said Chief Malabed.

With only four weeks on the ground for the project duration, the conscientious group of IBMers worked tirelessly as part of the IBM Corporate Services Corps (CSC) program to support the priority project identified and driven by the Santa Rosa City Police.

Like many ABV projects, the initial phase of the project involved working with the police to talk through sustainable project outcomes. This was an important part of the process explained Martin Gomez, CSC participant and IBM Information Technology Manager from Argentina.

“We were conscious of understanding their needs and expectations and then working toward outcomes that were achievable within four weeks. We were also conscious of doing something with longer term impacts and it was clear early on that by automating some processes, the police could spend more time on the streets supporting the Santa Rosa community.”

Once relationships and trust were established, the IBMers from Brazil, Argentina and Romania gathered detailed information on the current systems and processes utilised. Careful not to make assumptions or offer high tech unsustainable solutions, suggestions for the use of appropriate technologies that had the capacity to make a real difference to operations emerged.

In addition to the development of streamlined and improved records management processes, workshops were held attracting large numbers of attendees. The workshops focused on social media, online surveys, social marketing and Microsoft Excel. Offered not only to Santa Rosa City Police Officers, impacts spread across the city with Santa Rosa City Government workers and local Barangay Council employees claiming to benefit from learning straightforward processes that had the potential to simplify and automate records in their working environments.

Whilst the full extent of longer term impacts are yet to be determined, the Philippines National Police (PNP) have already indicated a keen interest in this work. Police Chief Malabed confirmed talks have already begun with the PNP in relation to this pilot project, referring to its potential to be replicated in other police stations. The Santa Rosa City Police are also steps closer to being the first to have an automated Crime Analysis Unit.

Martin was one of twelve committed corporate volunteers recently in Santa Rosa, working on skills capacity building projects with the local government and local IT sector. This was the 14th team of corporate volunteers to visit the Philippines under IBM”s CSC program since its inception in 2008.

The project is also one of more than 50 diverse ABV supported IBM CSC projects undertaken in the Southeast Asia and China regions since 2008 highlighting ABV’s experience and knowledge in partnering with corporates to deliver their social responsibility programs.
As a core NGO partner, ABV”s collaboration with IBM over the past six years has provided opportunities for highly skilled and high achieving IBM employees, like Martin, to increase their leadership skills, share their expertise and give back to communities.